Make a Kuwait Airways Booking and Find Some Amazing Deals

Kuwait Airways is the national airline of Kuwait, who has its head office and main hub based in Kuwait International Airport.

The airline operates scheduled international services throughout the Middle East, Asia, Europe and North America, with the aim to re-establish its network to reach over 46 countries around the world.

The airline was founded in 1954, making it one of the oldest airlines in the Middle East. During its founding years, it was known as Kuwait National Airways and flew to limited Middle Eastern destinations such as Jerusalem, Abadan and Damascus. It changed its name in julio 1955 to Kuwait Airways and later became 100% wholly owned by the Government of Kuwait.

The airline is a member of the Arab Air Carriers Organization, and also has codeshare agreements with Ethiopian Airlines, Middle East Airlines, Yemenia and Alitaila.

Kuwait Airways currently has a large fleet of 27 aircraft, consisting of mainly airbus models, with some Boeing aircraft. The airline plans to further expand their fleet with the latest Airbus A320-NEO, Airbus A330-900 and Airbus A350.

As an international airline, Kuwait Airways flies to over 20 countries and over 35 destinations across the continents of Asia, Africa, Europe and North America. The airline also aims to increase this to over 45 destinations, within the coming years.

Hand luggage for Kuwait Airways is different for each travel class for its weight. The size of any piece of cabin baggage, however, should not exceed the dimensions of 56 x 46 x 25 cm. In addition to the following hand baggage allowances, each passenger is allowed a personal item, of items such as a handbag, briefcase, umbrells, blanket, camera or reading material.

The weight and number of items for checked baggage is determined by the class flying of the passenger. In addition to the following allowances, passengers who are part of the Oasis Club may be entitled to additional items of baggage.

Passengers may be subject to additional charges if they have more than their allocated baggage allowance. This means that if there are additional pieces, weight or oversized baggage, you will have to pay for them at the airport.

Passengers can check in online from the comfort of their own home between 24 hours and 3 hours before the flight departure time. To do this, head to the online check in service on the airline's website and follow the directions to check in online, view and change your seats, and print or download your e-ticket/boarding pass. For this service, you will need your flight number, destination, family name, booking confirmation and passport information.

If you are unable to check-in for your flight online, you can do so upon arrival at the airport. Please be aware that each airport and flight has different check-in opening times, so be sure to check the time for your flight on the airline website, so that you do not miss the check-in deadline. Generally, the airports open their check-in desks around 3 hours before your flight, and close them around 1 hour before departure time.

Kuwait International Airport is Kuwait's major international airport, located just 15.5 kilometres south of Kuwait City in Farwaniyah. The airport spreads over an area of 37.7 square kilometres. In the airport complex, there is a section for the Al Mubarak Air Base which is used by the Kuwait Air Force. In addition to being the hub for Kuwait Airways, it is also the hub for airline Jazeera.

Airlines that fly from and Kuwait International Airport include KLM, Qatar, Lufthansa, Etihad, AlMasria Universal Airlines, Ethiopian and Air India. Mihin Lanka used to have flights to this airport, prior to it ceasing operations in 2016. 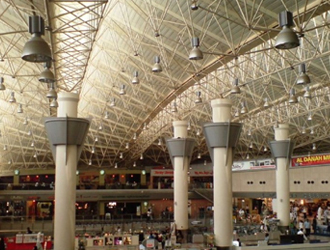 On most of its services, Kuwait Airways only have three classes of travel; Economy, Business and First. However, on the flights that operate with the Boeing 777-300 aircraft, there is an additional class called Royal Class.

Kuwait Economy Class offers comfortable settings with a range of facilities to enjoy for the budget traveller.

Kuwait Airways Economy Class facilities include entertainment options, with up-to-date films and music that can be played on the entertainment systems placed on the rear of seats.

Hot meals are available as a starter, main and dessert and a selection of beverages. You can choose from three halal meals, and there is no pork available due to religious reasons. Breakfast is also provided with a pastry, coffee, tea two hours before your arrival.

Baggage for economy class passengers is the least for all classes, but is still very generous. See above for the 'Baggage' section for more details and specifications.

The service in economy are well-trained and friendly, meaning the whole experience in economy is comfortable and enjoyable.

Seating in economy is comfortable and the individual seat selection can be requested at check-in for a small fee. You can also request an extra seat if you are carrying musical instruments or various other elements. The extra seat request will be charged.

Before flying, relax in the exclusive business lounge. On-board, make the most of complementary services, including movies, meals and beverages.

Relax in your comfortable seats, an upgrade from Economy. Complimentary amenities include blankets, headsets for viewing movies, and sleeping​ blinds.

If you wish to upgrade your ticket to Business or First Class, you should contact a KAC sales office or at the KAC sales counter at the airport.

First Class get all the amenities of Business Class, such as the airport lounge and premium meals, beverages and blankets for the plane. In addition, Kuwait Airways offers Limousine Services to first class passengers at London Airport.

Enjoy your privacy in enclosed suites, relax in your fully reclinable seat with luxurious Arabic coffee.

The Royal Class is the airline's own name for its long-haul first class.

Passengers travelling in Royal Class can get all of the above in First Class, as well as a dedicated check-in line at the airport for fast-tracked services. At the airport, passengers will also have access to the First Class Lounge, with drinks, snacks and buffet available. Passengers can enjoy the attentive staff in Royal Class, with a high ratio of staff to passenger.

Food in Royal Class is of the most optimum quality and taste, with options for main course to suit your taste.

Passengers enjoy a private suite on board the plane, with large and comfortable leather chairs which can recline.

Please click on the logos below to find out more about airlines that fly similar routes to Kuwait Airways:

There is a wide range of music options, with complete albums from many genres including pop with artists such as Beyonce and Bruno Mars.

There are a mixture of Hollywood new-releases on board the plane, alone with some Middle-Eastern films and childrens films, to suit all audiences.

Kuwait Airways provide all passengers with a complimentary drinks service on board. However, no alcohol is to be served or consumed on board, regardless of a destination.

WiFi is available to purchase on some Kuwait Airways flights, depending on the flight and aircraft using. These services can be paid for onboard the flight.

There are three tiers of membership:

The only recent airline alliance that Kuwait Airways had was with Jet Airways. This has been temporarily suspended since 2019, when the Indian airline was grounded in abril 2019.

Historically, the airline has previously had alliances with Shorouk Air and Trans World Airlines.

If you require any special assistance for your flight, or wish to request a special service for your flight, you can do so here. They offer services for passengers with wheelchairs, vision disabilities or oxygen devices, although you can put in any request that you want.