Seach & Book Flights to & Within Maghreb

Search for and book flights within Maghreb through Alternative Airlines. Through our site, we can help you find out where to fly and which airlines operate frequent flights within the Maghreb region of Africa, with great prices and lots of flexibility!

As of octubre 2022, travel advisories have been set regarding travelling safely around the Maghreb. Please click here for more information.

Why Buy Flights within Maghreb?

The Maghreb, otherwise known as Northwest Africa, is the western region of North Africa, consisting of Algeria, Libya, Mauritania, Morocco, Tunisia and the Sahrawi Arab Democratic Republic. These countries are situated in a mix of arid and semi-arid environments. If you're visiting the Maghreb region of Africa, the south has a Saharan climate where rainfall is extremely rare and temperatures are scorching hot, whereas the north experiences a more Mediterranean climate consisting of hot, dry summers and cool, wet winters. The west of the Maghreb region has an oceanic climate with cool summers and cool winters.

The countries in the Maghreb region are rich with history, culture and delicious cuisines all waiting to be experienced. Book your flights to the Maghreb today through Alternative Airlines and see what these countries have to offer! 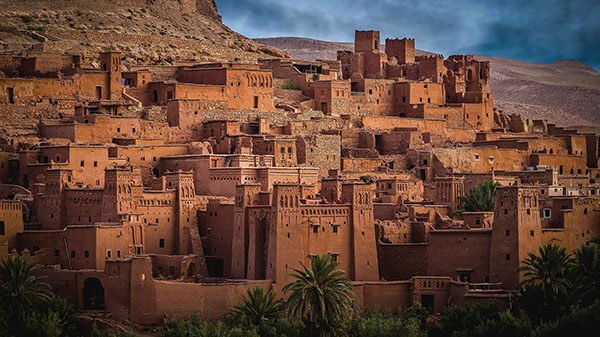 Use our search form at the top of the page to book your flights within the Maghreb today!

At Alternative Airlines, when you search for your flights within the Maghreb or to countries in the Maghreb region, we'll show you all of the best and most suitable airlines and routes based on your search criteria. Find out below which airlines operate frequent scheduled flights in and around the Maghreb region, including Air Algérie, Libyan Airlines, Nouvelair, Royal Air Maroc and Tunisair, among others.

Air Algérie is the national flag carrier of Algeria and is headquartered in Algiers. The airline flies to over 70 destinations across North and West Africa, Europe and the Middle East. Air Algerie operates out of its hub at Houari Boumediene Airport. Inside the Maghreb region, Air Algerie flies to Nouakchott, Casablanca and Tunis, as well as many domestic destinations in Algeria.

Tunisair is the national airline carrier of Tunisia, operating out of its main base in Tunis-Carthage International Airport. The airline currently flies to over 100 destinations across North Africa, Europe and select cities in the Middle East. Maghreb destinations with Tunisair include Algiers, Oran, Casablanca, Nouakchott and Tripoli, as well as some domestic flights in Tunisia.

Mauritania Airlines is the flag carrier airline for Mauritania and is based at Nouakchott-Oumtounsy International Airport. It is currently the only airline operating in Mauritania and has around 15 destinations that it flies to, mainly in North Africa and select cities in Europe. The airline flies to some Maghreb destinations including Casablanca, Algiers, Tunis and domestic airports in Mauritania.

All Airlines Flying Within Maghreb

Other airlines are available to use when flying from city to city within the Maghreb. Although major airlines like Air Algerie and Royal Air Maroc help connect the Maghreb with the rest of the world, they may not be able to fly to more remote destinations or airports like smaller airlines can. Below you'll find the full list of airlines, including the ones already mentioned, that fly within the Maghreb region and the airports they fly to. 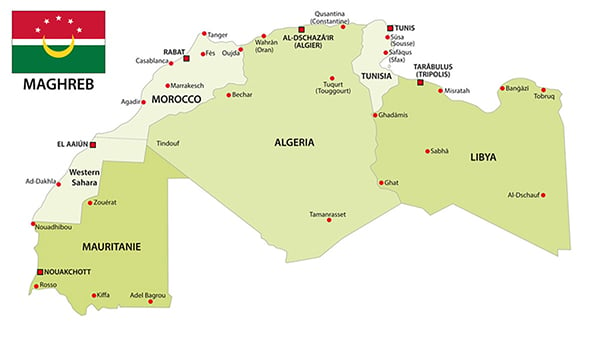 Image Source: The University of Kansas

Suppose you're looking for a trip where you can delve into ancient history and discover the different cultures mixed into the Maghreb region. Why not book a flight today through Alternative Airlines and see all that it has to offer? The most popular and most visited countries within the Maghreb are Tunisia, Morocco and Algeria as they are rich with friendly resorts suitable for everybody, delicious cuisines and natural landscapes.

Within the capital of Tunis in Tunisia, you'll find the streets completely decorated with 'souks' - sets of colourful shops and boutiques that are situated in the medina of Tunis. These shops were built during the Hafsid dynasty in the 13th century and hold a lot of history and tradition.

Away from the city, you can also find some of the Mediterranean's most pristine beaches, such as Hammamet and Monastir - you can expect to see crystal-clear waters, lots of vegetation and the desert landscape surrounding these beautiful beaches. The most popular time to visit Tunisia is in the Spring or Autumn as the beaches are less crowded and temperatures are comfortable.

Although it's not the capital city of Morocco, Marrakech is one of the most popular cities to visit when in the country. It's known as a city of luxury that is rich with palaces, 5-star restaurants, luxury spas and hammams. Outside the city, you can experience desert treks close to the Sahara Desert and even take a hike to remote waterfalls where you'll feel refreshed amongst Morocco's arid climate. The ideal time to visit Morocco would be in Autumn or early Spring as the weather is pleasantly warm.

Known as one of the friendliest countries in North Africa, Algeria is famous for its spectacular coastline, unique cultural sites, bustling cities and exquisite cuisine, however, it still seems to be at the bottom of most travellers' checklists despite all it has to offer. But this means you can have an unforgettable experience in the Maghreb while escaping the crowds! The best time to visit Algeria is in March or from October to November when the weather is cool and sunny.

Which airlines fly within the Maghreb?

Several airlines operate scheduled passenger flights within Maghreb. The airlines that offer the most routes in and around Maghreb include Tunisair, Air Algerie, Royal Air Maroc and Libyan Airlines. When you search for your flights to the Maghreb through Alternative Airlines, we'll show you the best airlines to fly with based on your search criteria, as well as alternative airlines if you can't find the route you need that is operated by your preferred airline.

Can I buy flights within Maghreb and pay later?

Yes - you can do this right here at Alternative Airlines! When you search for your Maghreb flights through our site, you'll be able to secure your flights with one of the many flexible payment plans we offer at checkout including Afterpay, Klarna, Spotii, Tabby, Postpay and many more. Paying later for your Maghreb flights means you can split the cost of your tickets into instalments that can be paid back over a weekly, bi-weekly or monthly basis, making the cost of your flight more manageable and easier to budget.

How many countries are in the Maghreb?

The Maghreb region is made up of 5 countries in North Africa - these are Morocco, Algeria, Mauritania, Tunisia and Libya. The north of the Maghreb has a Mediterranean climate whilst the south has a more arid, Saharan climate.

Is it safe to fly within the Maghreb?

Due to concerns over safety and criminal activities across multiple countries in the Maghreb region, there may be travel advisories and guidelines set to ensure the safety of all travellers. This information has been updated as of octubre 2022 and is based on the advice provided by the US government.

As of octubre 22, it is NOT safe to travel to Libya from any international country due to crime, terrorism, civil unrest, kidnapping and armed conflict.

As of octubre 22, it is recommended that anyone entering or travelling around Tunisia should exercise caution and stay 30km away from the border of Libya in southeastern Tunisia due to terrorism.

As of octubre 22, it's recommended that anyone entering or travelling around Morocco should exercise caution due to the risk of terrorism.

As of octubre 22, the US government has suggested that all travellers reconsider travel plans when entering or moving around Mauritania due to the increased risk of crime and terrorism.

For more detailed information on these travel advisories, please take a look at the official Travel Advisories page that is updated regularly by the US government.