Make a Malindo Air Booking and Find Some Amazing Deals

Malindo Air is a Malaysian premium airline which has headquarters in Petalin Jaya in Malaysia and has Hubs at Kuala Lumpur International Airport (KUL) and Sultan Abdul Aziz Shah Airport (SZB). Currently, Malindo Air has 800 flights travelling weekly to over 40 destinations, which include 31 destinations to India, Thailand, Indonesia, Nepal and Pakistan. The airline generally provides hybrid-full services on its aircraft, meaning they operate with a premium service business model with different fares, allowing customers to opt between full-service to cheaper fares with fewer amenities.

The airline's official name is Malindo Airways Sdn Bhd, with a trading and brand name of Malindo Air. The name Malindo derives from the cooperative pact between Malaysia and Indonesia.

Commencing operations on 22 marzo 2013, Malindo Air is the first airline to operate the brand new dual-class layout B737-900ER in Malaysia. The airline’s inaugural flight took off from Kuala Lumpur to Kota Kinabalu, Sabah, Malaysia on 22 marzo 2013 and has since expanded to include popular regional destinations in Thailand, India, Indonesia, Singapore and Nepal with the first international flight departing for Dhaka, Bangladesh on 28 agosto 2013.

Malindo Air started its ATR72-600 operations from Sultan Abdul Aziz Shah Airport, Subang Skypark on 3 junio 2013. The carrier currently operates a young fleet of Boeing 737-900ER, 737-800 and ATR72-600 aircraft for both domestic and international flights. Malindo Air is strengthening its coverage in Thailand with the inauguration of regular flights from Kuala Lumpur to Phuket on 10 noviembre.

The airline is 51% owned by the National Aerospace & Defence Industries Sdn Bhd of Malaysia and 49% by Indonesia's Lion Group, operates four weekly flights on the new route, an airline insider in Bangkok.

Malindo Air operates both domestic flights within Malaysia, and also to destinations across Asia and Australia. Although Malindo Air is part of the Lion Air Group which flies to a much wider network, the following tables are the destinations which are currently served by Malindo Air only. 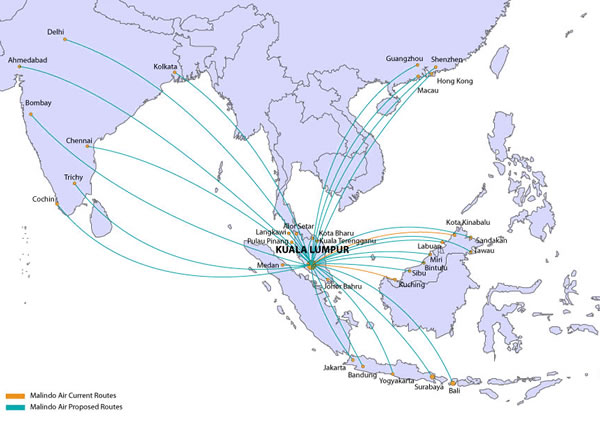 Free checked baggage is allocated based on your route travelling, ticket class and additional terms and conditions of your ticket. Therefore the following information is to be used as a guide only. Please check the terms of your individual ticket fare to see your permitted checked baggage allowance.

Passengers are permitted a total of 40kg luggage, with each item weighing no more than 32kg.

Passengers with Flexi tickets are permitted a total of 30kg luggage, with each item weighing no more than 32kg.

Passengers with a value ticket are permitted 20kg of checked baggage.

Passengers with a super saver ticket do not have any baggage included for free as part of this fare.

Passengers can check-in online for their Malindo Air flights via the airline website. This service is free to do and opens from 48 hours to 4 hours before the flight is due to depart. Passengers will need to visit the airline website from a computer, and either print the boarding pass, or download it onto a mobile device.

Passengers can check in for their flight on a mobile device via the Malindo Air website. Passengers can then download an e-ticket to their device where it can be used as a boarding pass.

At KL International Airport, you can also opt to check-in using a self-service kiosk which is open 24 hours before your flight, and closes 75 minutes before departure. 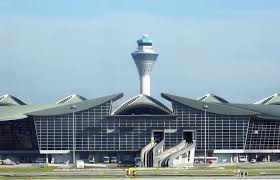 Malindo Air's Economy Class offers a range of facilities for you to enjoy. Various amenities are on offer depending on your flight journey time.

You will have access to beverage service for flight journeys that are less than 1 hour, which are only Singapore flights. For flight durations of 1 - 3 hours, you can enjoy a hot snack and beverage service. If you are flying for over 3 hours in Economy Class, you will be offered a hot meal and selection of drinks to enjoy.

On ATR routes, you can purchase drinking water or a Starbucks coffee and pastry on board.

In-flight entertainment is also available for passengers to enjoy.

Malindo Air's Economy Class seating are designed as reclining leather seats, making them fit for comfort whilst providing great value. The seat pitch (distance between back and front of each seat) is 32 inches.

Malindo Air currently do not offer a premium economy service on board their flights.

Business class with Malindo Air is all about offering a luxurious and convenient experience.

Passengers travelling in business class do not only get to experience luxury onboard the plane. Instead, the luxury starts at the airport with a dedicated and personalised check-in service, and with access to the KL Airport lounge.

Passengers can also enjoy a generous 40kg of checked baggage allowance for their flights.

Onboard, passengers can enjoy a business-class meal, which are exclusively designed for guests with tasty and well-balanced options.

The seats on Malindo Air's business class are luxurious and comfortable, consisting of spacious leather seats with 45 inches of legroom (seat pitch). There are also in-seat power sockets for charging personal devices conveniently.

Malindo Air currently does not have a first class onboard their flights. If you are looking for more comforts and luxuries, check out the airline's business class.

Please click on the logos below to find out more about airlines that fly similar routes to Malindo Air:

Passengers can enjoy the wide selection of in-flight entertainment from their personal in-seat screens. Choose from the latest releases from Hollywood, or some older classic movies, with both international and western options to choose from. There are also a selection of TV shows, music and audio entertainment, and also games which can be played on the entertainment screens.

Malindo Air offers passengers a selection of delicious Malaysian specialities, including dishes such as Mamak Mee Goreng, Prawn Sambal or a simple Omelette.

On Malindo Air flights operated by ATR, Economy class passengers will be able to purchase items such as pastries onboard their flight.

Passengers can order any of the following special meals for their flights, by contacting the airline directly at least 24 hours before flying:

Malindo Air does not currently serve alcoholic beverages on board their flights.

Malindo Air offers passengers WiFi and roaming services to passengers, meaning they can stay connected at all times during their flight. Use the WiFi to be productive and catch up on work, to browse social media or watch videos.

Please note that this WiFi service is available on selected flights only.

How much does WiFi cost on Malindo Air?

For passengers wanting the lite version, to access social media only, it costs only $3.95 USD.

Malindo Air is part of the Malindo Miles frequent flyer program. This allows regular flies to earn points as they fly, which can be exchanged once enough have been collected. Different fares and ticket types will earn you different amounts of miles points.

Currently, this airline is not part of any airline alliance. However, they are part of the Lion Air Group as a subsidiary, alongside airlines such as Batik Air, Wings Air and Thai Lion Air.

Malindo Air provides a wide range of passenger services and special assistance, from elderly passengers to expectant mothers or families travelling with young children, Malindo Air will do their best to help make your journey more comfortable. Simply contact the airline directly, allowing plenty of time before your flight to see how the airline can assist you.

On Saturday 6 diciembre at 8.10 am, Malindo Air commenced its first flight from Kota Kinabalu to Tawau in Malaysia's Sabah region. Malindo Air's CEO described the airline as "thrilled" to be able to offer services to the second city in Sabah. The new route, which operates once a day, is hoped to attract high numbers of domestic leisure travellers.

CEO of Malindo Air, Chandran Rama Murthy, is confident that this new route will give people more opportunity to see Lake Toba, as a new direct service at great value is very encouraging for local tourism.

Malindo Air to fly to Nanning

The operator VINCI Airports, who operates three airports in Cambodia, has reported that 3 million passengers used these airports in the first quarter of 2018, a 26.1% year-on-year increase. At Phnom Penh Airport, the country's capital, this upward trend is even steeper at a staggering 34.5%. The capital’s airport handled 1.4 million passengers, while the increase was mainly attributed to new services introduced by Malindo, Vietjet and Shenzhen Airlines. Chinese carriers such as Spring, China Southern Airlines and Xiamen Airlines all increased services to Phnom Penh.

Local Cambodian start-up airlines, JC International and Lanmei Airlines, may also be responsible for the surge in traffic, as both recently established flights to Singapore and Bangkok. Passenger traffic at Siem Reap airport increased by 17.4%. Travellers from China topped the passenger lists, while domestic travel also expanded. This is part of an ever-growing tourism trend in the country, who saw the number of international travellers visiting the kingdom reaching 5.6 million in 2017, up 11.8% (statistics from the Ministry of Tourism). If predictions are correct, Cambodia should be letting through its immigration over 6.1 million tourists this year.

Malindo Air has added 26 additional domestic flights to its existing schedule during the 14th General Election week, to accommodate increased demand for the general election.

In a statement, Malindo said the extra frequencies were applicable between 8 and 10 mayo, valid for all purchases made online, over the counter at all Malindo Air ticketing offices and through travel agencies in Malaysia.

For East Malaysia-Kota Kinabalu and Kuching, 16 flights that contributed to 2,592 seats have been added. On the other hand, 10 flights with the capacity of 1,620 seats are added to flights in Peninsular Malaysia including Penang and Kota Bharu.

Malindo Air had earlier announced one-time fee waiver for reissuance or date change fees for tickets issued on or before abril 10, 2018 through their call centre and ticketing offices for GE14.

Malindo Air has set a precedent for filing a preliminary schedule with a tentative start date of junio 2018. The airline intends to operate Boeing 737-900ER aircraft on Kuala Lumpur-Denpasar-Melbourne. The Melbourne-Denpasar leg will become the third Australia-Bali route launched in little more than a year by the Lion Air Group-owned airline. Malindo will compete on the Melbourne-Denpasar leg with Garuda Indonesia, Jetstar and Qantas, while AirAsia, AirAsia X, Batik Air, Indonesia AirAsia and Malaysia Airlines fly Kuala Lumpur-Denpasar. Only AirAsia X and Malaysia Airlines operate Kuala Lumpur-Melbourne non-stop.

Malindo Air celebrates 5 years of flying this month. Malindo Air offers great value fares from KLIA to destinations both within Malaysia and beyond. All Malindo Air (OD) flights can be booked via the GDSand ticketed using GP-275.

Not your usual flight! A Bangladeshi man was detained after he stripped off and attacked a stewardess during a Malindo Air flight from Kuala Lumpur to Dhaka on Saturday. The airline said in a statement posted on its Facebook that the disruptive passenger onboard OD162 was met on arrival by a security team and detained by authorities in Dhaka.

The man attacked the head stewardess when he was asked to put on his clothes. Other passengers then helped to restrain the man and tie his hands behind his back. Pictures of the man without clothes have been circulating on social media platforms. “The airline will continue to stay vigilant to ensure passengers travel safely,” Malindo Air said.

Malindo Air announces a new service and cancel another!

Malindo Air is launching two new regional services between Malaysia and Indonesia with an ATR72 aircraft with services between Ipoh - Medan and Penang - Banda Aceh. In addition, Malindo has announced it is cancelling Kota Kinabalu – Taipei Taoyuan service, as the airline schedules last flight on 10APR18 from Taipei. Operational schedule for this 4 weekly flights is removed in this week’s schedule update, however bookings for flights on/after 11APR18 already closed earlier this year.