Make a MASwings Booking and Find Some Amazing Deals

Founded in 2007, MASwings is a Malaysian airline flies to many regional destinations within East Malaysia and Indonesia with its cost-effective and safe service. The airline's full name is MASwings Sdn Bhd, but is branded as MASWings. The airline is hubbed at, and headquartered at, Kota Kinabalu International Airport (BKI), from where it operates the vast majority of its services.

MASwings is a subsidiary of Malaysia Airlines and was created to focus on routes in the regional community of the East Malaysian states of Sabah and Sarawak (Borneo). MASwings flew its inaugural flight on 1 octubre 2007 and has since expanded its route network to fly to over 20 different destinations with its fleet of more than 15 aircraft.

Currently, MASwings flies to 24 destinations, mainly domestically within Malaysia, but also occasionaly Indonesia. The main regions the airline flies to are Sarawak and Sabah, as per the table of destinations below: 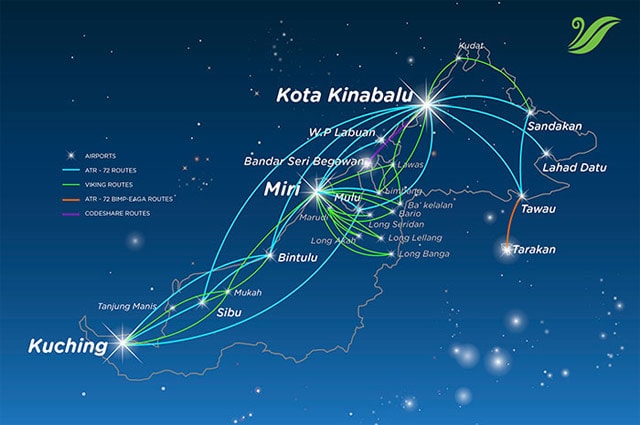 The MASwings baggage allowance policy allows passengers to carry one carry-on bag in Economy Class, weighing no more than 7kg. The item of hand baggage must not exceed the dimensions of 56 x 36 x 23 cm.

Your MASwings checked baggage allowance will depend on which aircraft you're flying on, so please check your e-ticket or with the airline before you pack your bag. For passengers flying on the ATR 72-500 aircraft, the weight limit is 20kg for Economy Class passengers.

You may check as many pieces of baggage as you wish, as long as it doesn't exceed the total weight limit stated.

If your carry-on baggage exceeds the size or weight limit, MASwings has the right to charge a fee and check your bag as checked baggage.

If your checked baggage is over the weight limit, you will be charged per kg that it is overweight. Currently, this is 5 MYR per kg.

Passengers can also check-in from their mobile, which also opens 48 hours before flying, and closes 60 minutes before your scheduled flight time.

Kota Kinabalu International Airport is an international airport in Sabah, Malaysia and is the airport hub for MASwings. The airport was originally used for the military in WWII but now is now used by a number of commercial airlines offering scheduled passenger services. The airport is separated into two terminals. Terminal 1 is the primary terminal in the airport and deals with the majority of passenger services at the airport. Terminal 2 is the older and smaller terminal, it used to deal with charter and low-cost carrier but now operates as a cargo terminal. Other airlines that operate out of the airport include AirAsia, Malaysia Airlines and Malindo Air.

Currently, economy class is the only class of travel that MASwings provide.

Passengers can enjoy complimentary drinks with a light snack on board flights with this airline. Free newspapers and magazines are also provided free of charge.

The seats onboard these planes are comfortable, with a generous amount of width and pitch of 31 inches. The seat formation is either 1 x 2, or 2 x 2, depending on the aircraft flying in.

Premium Economy is not currently an option for MASwings flight.s

There is no business class currently available onboard this airline's flights.

There is currently no first-class onboard MASwings aircraft.

Please click on the logos below to find out more about airlines that fly similar routes to MASwings:

Passengers can use the short flight times of MASwings to read the complimentary newspapers and magazines provided. Alternatively, there is some additional basic in-flight entertainment on the ATR aircraft.

Due to the short journey times of most of the routes that MASwings fly, there is not a full meal served on board. However, there is still complimentary drinks and snacks available. On the longer flights of 60 minutes or more, passengers can enjoy items such as muffins and sandwiches.

There is currently no WiFi services onboard this airline, either paid or complimentary.

This airline participates in its parent company's frequent flyer program, called Enrich. This was introduced in 2006 and allows members to accumulate miles on qualifying flights on partners such as Air France, Alitalia, Emirates, KLM and Virgin Atlantic.

MASwings is currently not part of any Airline Alliance. However, it entered into a codeshare agreement with Royal Brunei Airlines in 2013. This allows the two airlines to codeshare on flights between Kota Kinabalu and Bandar Seri Begawan.

Passengers who require any type of passenger services, such as reduced mobility assistance, travelling with young children or expectant mothers should contact the airline well before their flight to ensure there is enough time to accommodate their requests.