Buy Flights to & within Mesopotamia

Flights To and Within
Mesopotamia

Looking to explore the ancient history of Mesopotamia and want to find out how to fly there? Well, look no further! At Alternative Airlines, we have 650+ airlines available for you to book with and over 40 different ways to pay for your flights, making it super simple for you to search for and book flights to the Mesopotamia region with as much flexibility as possible!

1. Why Buy Flights to Mesopotamia

3. Airlines Flying To and Within Mesopotamia

Why Buy Flights to Mesopotamia?

Mesopotamia is the historical region of Western Asia and specifically refers to the land between the River Tigris and the River Euphrates. The majority of Mesopotamia is in modern-day Iraq, but parts of Syria, Turkey and Kuwait also occupy this region. Mesopotamia used to consist of ancient cities including Washukanni, Ninevah, Hatra, Assur and Nuzi, among several others. Today, the towns/cities that are situated in Mesopotamia are Kuwait City, Basra, Nasiriyah, Al Diwaniyah, Najaf, Karbala, Ramadi, Baghdad, Hillah, Kūt, Amarah, Mosul, Urfa, Mardin and Diyarbakır.

Mesopotamia played a part in many global empires including the Hellenic Empire, the Roman Empire, the Persian Empire, the Mongol Empire, the Ottoman Empire and the British Empire. This makes it a great region to explore for history enthusiasts who are passionate about the evolution of ancient civilisations in the Middle East. The climate in the region is semi-arid with temperatures reaching highs of 29°C (85°F). The best time to visit is either in Spring or Autumn when temperatures are cool and comfortable. 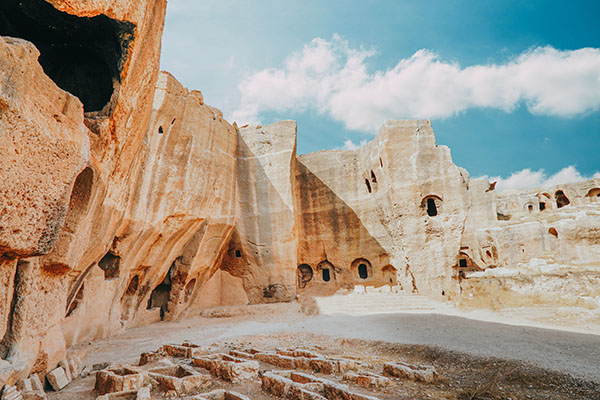 Use our search form at the top of the page to book your flights to and within Mesopotamia today!

Below you can see which airlines fly scheduled passenger flights to each airport listed in the table above as well as which cities you can fly from to reach each airport.

Kuwait International Airport is an international airport situated almost 10 miles south of Kuwait City, Kuwait. It's currently a hub for Kuwait Airways and Jazeera Airways. Entering the Mesopotamia region through Kuwait is an ideal option for international travellers departing from various cities across Europe, Asia and the Middle East.

Fly to Kuwait City from:

Basrah International Airport, also known as Basra Airport, is the second-largest international airport in Iraq and primarily serves the city of Basra. Fly to this airport if you'd like to experience the city of Basrah inside Mesopotamia. This is also the best airport to fly to if you want to visit Nasiriyah which is 190km away.

Fly to Basrah from:

Al Najaf International Airport is located in Najaf, Iraq. The airport used to be a military airbase but now offers passenger services with many well-known airlines including Qatar Airways and Royal Jordanian. Fly to this airport if you're planning to visit Najaf in the Mesopotamia region. It's also the most suitable airport to fly to if you want to visit Al Diwaniyah which is 62km away.

Fly to Najaf from:

Baghdad International Airport is the largest international airport in Iraq and is a hub for FlyBaghdad and Iraqi Airways. This airport is the best airport to fly into if you're planning to visit several towns in Mesopotamia including Karbala (135km away), Ramadi (120km away), Hillah (130km away) and Kut (200km away), as well as visiting Baghdad itself.

Fly to Baghdad from:

Fly to Erbil from:

Şanlıurfa GAP Airport is an airport situated in the Şanlıurfa province of Turkey. The airport is around 34km away from the Şanlıurfa city centre and is the best airport to fly to if you're planning to explore Şanlıurfa and its connections with Mesopotamian history.

Fly to Şanlıurfa from:

Mardin Airport is an airport situated in Mardin, Turkey. It's approximately 20km away from Mardin and is the best airport to fly to if you'd like to visit and learn about Mardin and its place in Mesopotamian history.

Fly to Mardin from:

Diyarbakir Airport is both a public airport and a military airbase situated in Diyarbakir, Turkey.

Fly to Diyarbakir from:

Airlines Flying To and Within Mesopotamia

Fly from Europe to Mesopotamia with:

Fly from North/South America to Mesopotamia with:

Fly from Africa to Mesopotamia with:

Fly from Asia to Mesopotamia with:

The following airlines operate flights to various cities and towns within Mesopotamia:

Which airlines fly to Mesopotamia?

Depending on the city or town you're flying to within Mesopotamia, there are many different airlines you can use. Many major airlines fly direct to Kuwait City, making it a great destination to begin in if you're planning to tour the region of Mesopotamia. These airlines include Air Arabia, Air India, British Airways, Bulgaria Air, Emirates, Ethiopian Airlines, Etihad Airways, IndiGo, KLM, Lufthansa, Qatar Airways, SriLankan Airlines, Turkish Airlines and Wizz Air. You can also fly to Baghdad with major airlines such as Emirates and Turkish Airlines, among others.

Can I buy flights to Mesopotamia and pay later?

Absolutely! Searching for your flights to or within Mesopotamia with Alternative Airlines means you can choose to pay for your flights with flexible Buy Now Pay Later payment methods, such as Afterpay, Klarna, Postpay, Spotii, Tabby and PayPal Credit, among several others. Spreading the cost of your Mesopotamia tickets over time and paying later means you can manage your flight budget even easier and is ideal for saving money in the long run.

Which airports can I fly to in Mesopotamia?

Please note, Alternative Airlines does NOT sell flights to or from Syria or Iran.

Can I fly direct to and within Mesopotamia?

Direct flights to cities and towns in Mesopotamia are available if you fly to the two airports in the region that many major airlines (such as Emirates or Turkish Airlines) fly to - Kuwait International Airport and Baghdad International Airport. Flying within Mesopotamia is possible if you use smaller airline carriers such as Iraqi Airways, Pegasus Airlines and AnadoluJet, among others.