Nile Air is an Egyptian airline based at Cairo International Airport which operates scheduled services to destinations in the Middle East, Egypt, Persian Gulf, Southern Europe and Africa.

The airline is Egypt's leading private full-service carrier operating scheduled services from Cairo and Alexandria to emerging airports in the region with a fleet of modern Airbus A320-200 aircraft.

Nile Air has an app that you can use to check in for your flight via your mobile device. The app is available on the Google Play Store and Apple's App Store.

The airline offers a full-service product, with beverages and meals, as well as your baggage allowance included in the price of an economy ticket. This means you won’t need to pay extra fees for baggage allowance.

The airline operates a young and modern fleet. In economy, you can expect comfortable seating with generous recline and padded headrests.

There are 8 seats in the separate Business cabin, giving an exclusive and private feel.

At the airline’s base in Cairo and most international destinations, business passengers can enjoy access to the premium lounge where they can choose to relax before departure.

Nile Air services a wide selection of fresh and delicious hot meals on every flight in Business Class.

Business seats have a pitch of 42 inches and are upholstered in fine padded leather. Passengers can select where they sit when booking, and are assured either a window seat or an aisle seat. 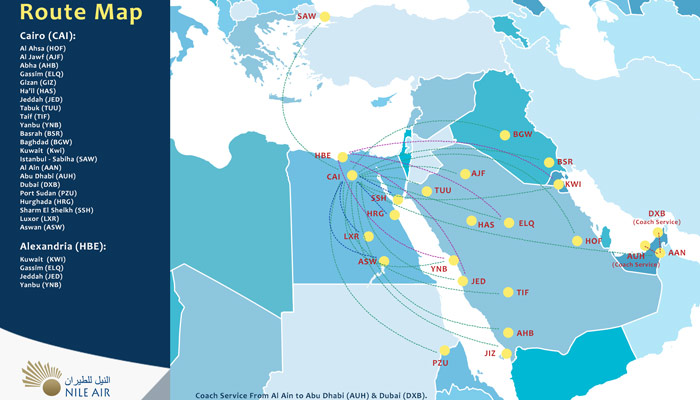 Cairo International Airport is the international airport of Cairo and the busiest in Egypt and serves as the primary hub for Egyptair. The airport also acts as a hub for Air Cairo, Air Go AMC Airlines, EgyptAir Express, Nesma Airlines, AlMasria Universal Airlines and soon-to-be SkyBird Airlines. The airport has three runaways and can handle nearly 18 million passengers every year.

Can't find the flight you're looking for with Nileair? Click on any of the airline logos below that fly similar routes to Nileair in and around Egypt.