Make a PassionAir Booking and Find Some Amazing Deals

PassionAir (formerly DAC International Airlines), is a Ghanaian that offers domestic flights to multiple destinations within Ghana. The airline is based at Kotoka International Airport, Accra& and offers daily flights from Accra to Kumasi and from Accra to Tamale, with plans to expand its route network in the coming years, predominantly focusing on the offering flights to and around West Africa.

PassionAir was founded under the name DAC International Airline, but shortly after it gained its air operator's certificate (AOC), it rebranded as PassionAir, which is what it's now known as today.

PassionAir flew its inaugural flight in agosto 2018 with a service between Accra and Kumasi and rolled out flights to Tamale shortly after.

PassionAir's fleet consists of entirely de Havilland aircraft. The airline currently has three Bombardier Dash-8 (DHC-Q400) aircraft within its fleet, which has the capacity to carry 234 passengers per aircraft.

All PassionAir passengers are given one free piece of carry-on baggage included in the price of their ticket. In addition to this, passengers can bring one small bag, such as a small rucksack, purse or a laptop bag.

Size and weight limits are as follows:

Passengers flying on PassionAir with a Silver or Bronze ticket are given a free carry-on baggage allowance of 7kg and the bag must fit within the dimensions of 22 x 35 x 56 cm.

Passengers flying on PassionAir with a Gold Ticket are given a free carry-on baggage allowance of 10g and the bag must fit within the dimensions of 22 x 35 x 56 cm.

PassionAir passengers with a Silver or Bronze ticket are given a free checked baggage allowance of 25kg.

PassionAir passengers with a Gold ticket are given a free checked baggage allowance of 30kg.

PassionAir offer passengers additional baggage, if they would like to take more baggage than the free baggage allowance allow. No single bag can weigh more than 32kg and there is a maximum limit of 10 bags per person.

Infants/babies flying on PassionAir are not allowed to take checked baggage on the flight. However, they're given a free carry-on baggage allowance of 7kg.

PassionAir flies to the following destinations in Ghana. The airline has expressed interest in adding a fourth route to Takoradi. 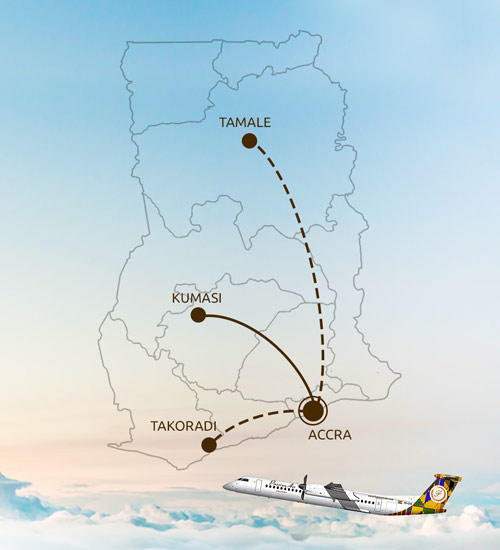 PassionAir only has one cabin class on its flights — Economy Class. The Economy cabin is comfortable, with a professional service carried out by the airlines expertly trained cabin crew.

There's no WIFI on PassionAir flights.

Passengers are served a light snack, usually, a pastry filled with meat or a vegetarian substitute, as well as a small bottle of water and/or juice.

Other airlines that use Kotoka International Airport as its hub airport include Africa World Airlines.