Make an Penair Booking and Find Some Amazing Deals

On April 2020, PenAir filed for bankruptcy and ceased operations, the airline grounded all fleet and ground operations as the effect. If you're looking for similar routes to and from Alaska, you can find alternative airlines to fly with below:

Please click on the logos below to find out more about airlines that fly similar routes to Penair:

PenAir was an American airline which is headquartered in Anchorage, Alaska and operated many flights from its hub at Ted Stevens Anchorage International Airport. PenAir had a codeshare agreement with Alaska Airlines.

When you buy PenAir airlines flights with us, you would be able to check-in online through the official PenAir Website. Simply put in your flight details between 2 and 24 hours before scheduled departure. Please be aware that you must still print your boarding passes as boarding passes presented on mobile devices will not be read by TSA scanners. TSA-approved boarding passes include:

If you are interested in TSA Pre-checks, please check out our page on how to buy flights with your known traveler number.

Even when you check-in online, you've got to make sure you see a customer service agent when you reach the gate before going through airport security. You should complete airport check-in at least 90 minutes before your scheduled departure. The PenAir check-in counter used to close 40 minutes before departure. 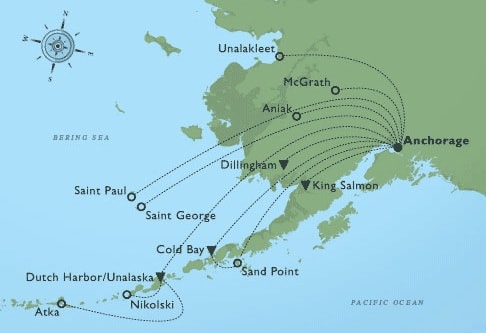