Make a Qazaq Air Booking and Find Some Amazing Deals

Qazaq Air is a Kazakh airline, which operates scheduled services from its main hub in Almaty International Airport and focuses on domestic flights. The airline was founded in 2015 and launched in July the same year. It commenced operations on the 27th of agosto 2015 with an Almaty-Astana route, linking Almaty to the country's capital. It's fleet consists of 3 Bombardier Dash 8-400 Next-Gen aircraft.

Passengers are permitted one piece of hand luggage, weighing a maximum of 10kg and measuring no more than 56 x 41 x 25 cm.

In addition, passengers are permitted one personal item, such as a handbag, coat, umbrella, laptop or printed materials.

Passengers who have purchased a Universal Fare (Y), Optimal Fare (S) or Saver Fare (B) are permitted 20kg of checked luggage.

Qazaq Air passengers can check in for their flight using this link. This service will open 24 hours before flying, and close 3 hours before scheduled departure time.

If passengers have been unable to check in for their flight online, they must do so at the airport. Visit the airport check-in desk to complete this process.

Qazaq Air fly to the following domestic destinations within Kazakhstan:

To learn more about flying domestically in Kazakhstan please visit our 'Domestic Flights in Kazakhstan' page.

Qazaq Air has also started operating its first international flights from Almaty to neighbouring Kyrgyzstan. There are also plans to operate from Atyrau to Astrakhan, in neighbouring Russia. 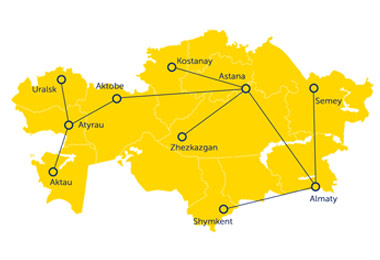 Please click on the logos below to find out more about airlines that fly similar routes to Qazaq Air:

Almaty International Airport is Kazakhstan’s largest airport, located 15km outside of the city of Almaty. 2017 saw this airport handle 5.6 million passengers, approximately 50% of all of Kazakhstan’s total passenger traffic.

This airport is also the hub for airlines such as Air Astana, Bek Air and SCAT Airlines, but also operates services for alines such as Uzbekistan Airways, Ukraine International Airlines, S7 Airlines and Belavia. It is expected that the new domestic airline, FlyArystan, will soon operate out of the airport.

Qazaq Air currently only operates an economy class on board its flights. However, passengers can have a great flight experience, with the attentive crew who offer food and drinks during the flight. In addition, the seats are wide-spaced and are leather seats, giving passengers the ultimate comfort to be able to relax during the flight.

Kazakhstan’s state-owned regional airline Qazaq Air has announced the launch of scheduled international flights. The airline, which is expecting the delivery of two new Bombardier Q400 NextGen aircraft in April and May of this year, has scheduled flights to neighbouring Russia and Kyrgyzstan in the coming IATA summer season. The first three international routes will link Almaty with Bishkek and Osh in Kyrgyzstan, and Atyrau with Astrakhan in Russia.

The Kazakh-state owned airline Qazaq Air and China Express Airlines are looking to get friendly in the next few weeks. China's first privatised airline has signed a Memorandum of Understanding with Qaaq Air, outlining their strategic cooperation. The Kazakh/ Chinese cooperation may be the first stage in a possible direct financial investment. This move could be a mutually beneficial cooperation between Qazaq Air and China Express Airlines is a continuation of a good-neighbourly partnership aimed at strengthening trade and economic ties between the two countries. Qazaq Air is expecting to take delivery of two new Bombardier Q400 next-gen aircraft in the spring of 2019. The fleet will thus extend to five aircraft of the type. The airline currently operates three 78-seat, Canadian-built turboprops, with an average age of less than three years.

octubre 2018 may markKazakhstan as the first country with aircraft from all three families of new generation single aisle re-engined aircraft. Air Astana became one of the first A320neo operators in 2016, and later this year will become one of the first Embraer E190-E2 operators. Kazakhstan’s second largest airline, SCAT, took delivery of its first 737 MAX 8 at the end of Mar-2018. For all three new aircraft types to be operating in Kazakhstan represents a major transformation, given that the market has historically been dominated by ageing aircraft and Russian models. Kazakhstan became independent in 1991, but for years its airlines continued to operate Soviet era aircraft.