Make a Red Wings Booking and Find Some Amazing Deals

Red Wings Airlines is a Russian airline providing both scheduled passenger and cargo charter services. Red Wings Airlines is based in Vnukovo Airport in Moscow, Russia. The airline was founded in 1999 under the name VARZ-400, after the Russian acronym of the Vnukovo Avia Repair Factory. In 2001, the airline was renamed Airlines 400, before rebranding to its current name in 2007. In 2019, the airline has been granted the rights to manage a newly launched airline - Arktika Airline.

Red Wing's partnership with NorStar establishes code-sharing agreements, whereby a air-route is jointly operated by partner airlines. In doing so the flight is performed only by one of the airlines. The following routes are operated by NordStar Airlines together with Red Wings:

The maximum weight for check luggage for Base Rate and Light tariffs is 23kg, the sum of the height, width and depth of the item must not exceed 203cm. Tariff Light customers are not permitted any checked baggage.

Web check-in begins 24 hours before the flight departure and ends one hour prior. Boarding passes should be printed by the passenger. There is no reason to visit the airport check-in desk for carry-on luggage when checking in online. Online check-in can be completed by visiting the Red Wings Airlines web check-in page.

Currently, this airline only provides an economy class service.The fleet that Red Wings proved very spacious cabins, meaning that passengers are able to relax in flight with plenty of personal space and room for cabin baggage. Passengers can stay entertained with the exclusive in-flight magazine ‘FlyRedWings’. 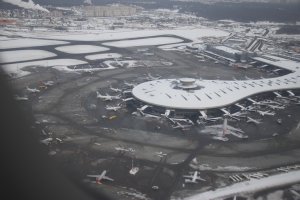 Book your Red Wings Airlines flights in English when you choose to book with Alternative Airlines. Communication is key to a smooth and efficient booking process. Thats why we display all booking details in English, along with having an English-speaking customer service team on hand 8am-8pm (UK time) every day.

Red Wings Airlines recently announced that it has been given permission from air authorities to commence regularly scheduled flights on a service between Russia and Baghdad. While the details of the new service are yet to be announced, Red Wings Airlines and the Iraqi Transport Ministry expect the new city pairing to increase tourism between Russia and Baghdad. This is Red Wings Airlines' first service to Baghdad. The Russian airline is expected to fly the between the two countries once a week initially, with the possibility of increasing the frequency of the flight if there's a demand.

What other airlines fly to similar routes?

There are other airlines that travel to similar destinantions such as JSC Donavia, Nord Star, S7 Airlines and more.