Founded in 2002, Rex Regional Express (otherwise known as just 'Rex', 'REX', or 'Regional Express Airlines') is a domestic Australian airline which is based in Mascot, New South Wales. The establishment of the airline was based on the result of a merger between two Australian airlines, Hazelton and Kendell. Rex operates scheduled regional flights to New South Wales, South Australia, Victoria, Queensland, Tasmania and Western Australia and has an airport base in at least one destination in each of those territories.

Rex Regional Express is owned by Regional Express Holdings, which owns a number of airlines and other aviation companies within Australia. The airline values safety, reliability and providing good services on every flight. It also strives to provide cheap fares for customers.

Looking to book REX flights? You can use the search bar at the top of the page to begin searching for flights. Remember that when you book through Alternative Airlines you can buy any Rex Airlines flight and spread the cost over time.

Regional Express Airlines flies to over 60 destinations across every major Australian territory. This includes destinations such as Adelaide, Melbourne, Sydney, Townsville, Cairns, Doomadgee, Esperance, King Island, Lismore, Melbourne, Moruya, Newcastle, Perth, St George, Sydney, Wagga Wagga and Winton. Why not book a one-way flight to Australia to one of the destinations below? 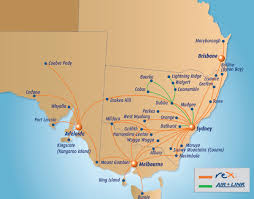 Passengers are entitled to two small bags that must fit within the dimensions of 23 x 34 x 48cm (9 x 13 x 19in) each or one briefcase and a small bag. The combined weight of this baggage must be no heavier than 7kg / 15lbs. In addition to this, passengers are entitled to bring on a personal item such as a handbag, a walking stick, an infant's food, a blanket or a camera.

Infants are not given a carry-on baggage allowance unless they have their own seats.

Please note that wheelchairs, crutches or prosthetics for passengers with reduced mobility are not included in the baggage allowance limitations.

Excess baggage can be added to your booking when booking with Alternative Airlines subject to an extra charge. Any baggage exceeding 32kg / 70lbs will be accepted as air freight instead of checked baggage. This is due to health and safety regulations. Excess baggage may be travelling on the next available flight if the flight lacks capacity.

Dangerous goods are not allowed onboard or in the baggage hold.

Prepare your booking and photo identification details in order to proceed with online check-in.

Passengers with reduced mobility, unaccompanied minors or travelling with carers must check in at the airport.

If passengers can't check in online or would prefer not to, they can check in at the airport. This can be done by visiting one of the check-in agents at the check-in desks.

Here are the closing times for airport check-in at each airport:

It's recommended to arrive at the airport 30 minutes before closing time at the very least.

Economy Class is the only cabin class that Rex offers. The cabin is comfortable and pleasant, with the airline's flight attendants on hand to help with anything that passengers might need.

On select flights, REX offers a number of extra legroom seats, which are named 'Rextra Legroom'. These seats are available to purchase at an additional cost and are sold on a first-come-first-serve basis.

Extra legroom seats are available on all Rex Regional Express flights when booking through Alternative Airlines. We allow you to purchase a seat with extra legroom at the time of booking so that you can have a more relaxed journey. Rex reserves specific seats at the front and in the middle of the plane to give passengers more space when they travel.

To buy your seat with extra legroom, make sure to select 'Yes' under the 'Extra legroom seat' section when offered at checkout.

Rex doesn't have an in-flight entertainment system installed on its aircraft, however, it does have in-flight magazines that are available to read on select flights.

Passengers are also welcome to bring their own personal electronic devices on board which can be used in flight mode when the fasten seatbelt signs are switched off.

Passengers are offered light refreshments once in flight. Although refreshments are subject to change, these usually consist of a soft or alcoholic drink and a packet of potato chips, a biscuit or another light snack.

Rex Business Flyer is the airline's frequent flyer program. Through Rex Business Flyer, passengers can earn points that they can collect and use to purchase future Rex Regional Express flights.

Rex Regional Express isn't a member of any airline alliance.

Rex's fleet mainly consists of Saab regional jets. The airline uses 340A, 340B and 340B+WT for its flights and has more than 50 aircraft overall. As of octubre 2022, the airline also has a Boeing 737-800 in its fleet, allowing it to carry more passengers on its domestic flights across Australia.

Wagga Wagga Airport is an airport southeast of Wagga Wagga, New South Wales and is the base airport for Rex Regional Express. Although Rex only flies to a small number of destinations from Wagga Wagga, the airport is where it bases its fleet. Two runways are available at the airport one is an asphalt runway and the other is a clay runway. The airport is owned by the Australian Department of Defence but leased by the Wagga Wagga City Council.

Other than Rex Regional Express, QantasLink is the only other airline to fly to/from the airport.

Regional Express Holdings (Rex), an Australian domestic carrier, has ambitious plans to ramp to services on its domestic network in 2021, thanks to new jet aircraft. This will be possible thanks to the proposed new jet services on domestic routes. Rex hopes to build up a fleet of 30-40 narrowbody jets, which will increase capacity on the carrier’s popular routes. The airline has already wet-leased six Boeing 737-800s. These aircraft will initially be launched on the Sydney (SYD)-Melbourne (MEL) route, which was one of the carrier’s busiest domestic routes prior to the COVID-19 pandemic.

Rex has launched two new routes from Gold Coast Airport, and will now fly to Melbourne and Sydney. From April, both services are operated twice-daily and are set to boost competition on two of the busiest routes from the Cold Coast. The launch of these new routes comes as domestic flights continue to grow following the Coronavirus pandemic.

Where does Rex fly to?

Rex flies within Australia, to domestic and regional destinations. Domestically, the airline connects major cities, including Melbourne, Sydney, Adelaide, and the Gold Coast. These are flights which connect interstate cities/destinations. The carrier also operates an extensive regional network, flying from the major cities to destinations within each state. For example, within New South Wales, Rex flies to Grafton, Parkes, Bathurst, and many other destinations within the state.

Can I book Rex flights online?

Yes, you can book Rex flights through Alternative Airlines! Alternative Airlines is an online flight search and booking site that makes it easy to find the flights you're after. We ticket all the major carriers, and many of the smaller regional airlines, that operate within Australia.

Can I take my pet with me on a Rex flight?

Of course! When flying with REX, you won't need to leave your precious pet at home - your pet can be on the same flight with you and be safely stored away in the pressurised cargo compartment of the aircraft. The fee for taking transporting your pet via a REX flight will vary depending on the weight of your pet. Check out Rex's policy on flying with pets for more information. Or you can take a look at our blog post on the best pet-friendly airlines.