Please take a look at the airlines below which serve similar routes to SBA Airlines.

Santa Barbara Airlines (SBA) was a Venezuelan airline which operated both domestic and international services with its hub located at Simon Bolivar International Airport in Caracas. 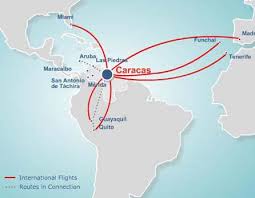 Simon Bolivar International Airport is located in Maiquetia, Caracas and is the main international air passenger gateway to Venezuela among the twelve international airports in the country. It handles flights to many destinations in the Americas, the Caribbean and Europe.

Other airlines which use Simon Bolivar include Aeromexico, Aerolineas Argentinas. Aeropostal, Insel Air, Avianca and LAN Airlines. It has two runaways and can handle almost 20 million passengers every year.