Make an Shandong Airlines Booking and Find Some Amazing Deals

In noviembre 2016, Shandong Airlines reported a 24.6% increase to 1.7 million passengers and operating revenue up 19.8%. The Chinese carrier, which already serves destinations in Cambodia, Japan, South Korea, Taiwan and Thailand, now offers four times weekly non-stop flights on the 2,569-kilometre route between Kunming (KMG) and Delhi (DEL). Two of these four flights originate in Jinan (TNA) while the other two originate in Qingdao (TAO). These seven routes are operated by five different airlines and involve four airports in China and three airports in India. Part-owned by Air China, Shandong Airlines operates a fleet of over 80 737-800s which will be used to operate these new routes, none of which face direct competition. The new service will run four times a week (Mondays, Wednesday, Fridays and Sundays), with the Monday and Friday flights continuing onwards between Kunming and Jinan – the capital of Shandong province and Shandong Airlines’ home base.

In addition to the domestic locations listed above, Shandong Airlines also fly to the following:

Passengers travelling in first class and business class are permitted two personal belongings, with the weight of each item not exceeding 8kg.

Passengers travelling in economy class are permitted one personal belonging, with the weight not exceeding 5kg.

All items of checked luggage must not exceed 203cm, and must not be less than 60cm.

Shandong Airlines offer online check in for passengers. The link to complete online check-in can be found here. This service will open the day before flying, and close 2 hours before scheduled departure time.

Alternatively, passengers can check in for their flights at the airport. The opening times for check-in desks varies according to the departure airport. To see a breakdown of these times, click this link. Alternatively, check your ticket for arrival and check-in times.

The companion card may be upgraded to VIP status. There are special redemption rates for VIP members – Gold card members and Platinum card members.

Alternative Airlines is the reliable and trustworthy company to use to ensure a smooth and safe booking of your flights with Shandong Airlines. This trust is emphasised by the fact we allow booking of Shandong Airline flights in English, providing you with important information and details in English.

Alternative Airlines provides rules and regulations on traveling with a service animal, pet, or an emotional support animal, on Shandong airlines planes.

Please click on the logos below to find out more about airlines that fly similar routes to Shandong Airlines:

Shandong Airlines fleet currently stands at a total of 97 aircraft with a further 44 on order (as of abril 2016). The favoured aircraft for Shandong Airlines is Boeing's 737-800 with a current total of 87. They also currently operate using Boeing 737-700's, Bombardier's CRJ-200ER and 700ER aircraft. 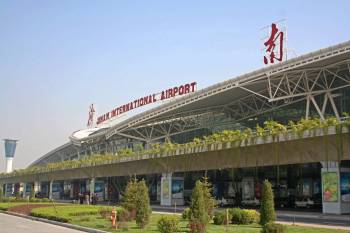