Make a Booking with Amazing Deals

The airline began operations in 1988 between Chengdu and Wanzhou. In agosto 2002, it was reorganised and the Sichuan Airlines Group, which is owned by the provincial government, became the major shareholder (40%). The other shareholders include are China Southern Airlines, Shandong Airlines and Shanghai Airlines.

The first long-haul overseas route was launched in junio 2012, with flights from its Chengdu hub to Vancouver, Canada. Its second long-haul flight, from Chengdu to Melbourne, Australia, was launched in febrero 2013 with three weekly services. On 17 octubre 2016, the airline launched twice-a-week service from Chengdu via Hangzhou to Los Angeles.

In noviembre 2016 Sichuan Airlines announced it will launch a non-stop flight between Chengdu and Dubai, operating twice a week. 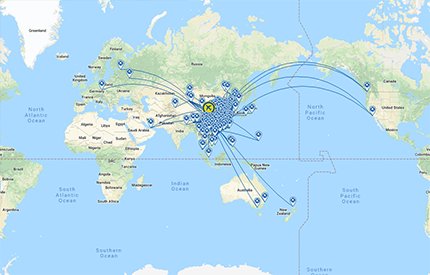 Sichuan Airlines on Saturday launched a direct flight connecting Chengdu, capital of southwest China's Sichuan Province, and Rome. This is the first regular direct flight between the two cities. The flight will operate every Tuesday, Thursday and Saturday by an Airbus A330, with a single trip taking about 11 hours.

Sichuan Airlines is adding new service to Turkey, with planned Chengdu – Istanbul service. From abril 2019, the Airbus A330 aircraft will operate this route 3 times a week.