Make a Skol Airlines Booking and Find Some Amazing Deals

Skol Airlines, or Skol Aviakompania, is a Russian airline which operates regular passenger, charter and cargo flights across Siberia. The company was founded in 2000 and is headquartered in Surgut. It works with companies such as Alrosa, a Russian diamond mining company, and Gazprom, a Russian natural gas production company.

It operates their services from a fleet consisting of helicopters, turboprop aircraft and narrow body equipment.

Skol Airlines their services from a fleet consisting of helicopters, turboprop aircraft and narrow body equipment. It has the following aircraft within its fleet:

SKOL Airlines flies to destinations across Eastern and Western Siberia. In the past, it has flown elsewhere, including to Haiti, the Philippines, Afghanistan, Pakistan, South Sudan, Uganda, Democratic Republic of Congo, Liberia and Lebanon.

Surgut International Airport, also known as Surgut North Airport, is an airport in Khanty-Mansi Autonomous Okrug, Russia, located just north of Surgut and the hub for Skol Airlines. The airport was first built in 1937, with a new terminal being opening in 1975 and had its first international flights in 2001. The airport handles more than 1.5 million passengers each year.

The airport is also the hub for Utair but serves airlines such as Aeroflot, Air Kyrgyzstan, Pobeda, Yamal Airlines and SCAT Airlines. 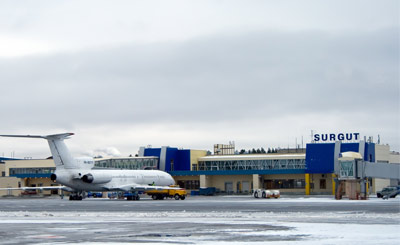 Avoid being confused and reserve your Skol flights in English! With us at Alternative Airlines, we give our clients the ability to book flights in English. Our clients can also contact our amazing customer service team who can speak English with any queries linked to their reservation.

Please click on the logos below to find out more about airlines that fly similar routes to Komiaviatrans: