Make a Skywork Airlines Booking and Find Some Amazing Deals

SkyWork Airlines was a Swiss airline in Bern and is based at Bern Airport, Switzerland. The airline operated scheduled and chartered flights to destinations across Europe and more specifically Austria, Croatia, France, Germany, Italy, Netherlands, Spain, Switzerland and United Kingdom.

SkyWork Airlines started its first scheduled flight to Rotterdam with a Dash 8 Q400. SkyWork Airlines strengthens its sales activities in the charter business and in 2015, the Bernese regional airline expanded its service offering by adding two new destinations Heringsdorf and Jersey and increasing the frequency of flights to London City.

You are entitled to 1 piece of hand baggage of up to 8 kg and no checked baggage.

Web check-in was available for SkyWork airlines. Once you made your SkyWork reservation with Alternative Airlines, you could check-in online on SkyWork Airline's online check-in page. You can check-in between 48 and 3 hours before departure and download your boarding pass to your digital wallet to save time and paper. Check out our online check-in page for more information. 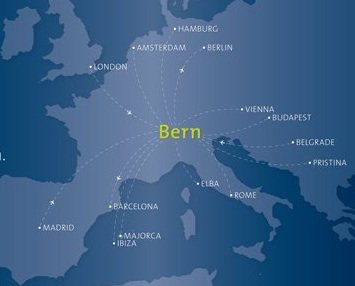 Bern Airport, is an airport serving Bern, the capital of Switzerland. The airport is a small getaway to many popular European Destinations with four main airlines serving the airports. Airlines that fly from and to Bern Airport include BMI Regional, Germania Flug (now chair airline) and Helvetic Airways.

SkyWork Airlines is planning to expand its fleet adding yet another Saab 2000 turboprop. The new Saab 2000 turboprop will be the airline's sixth aircraft of the type and will be used to fly domestic routes from its base in Berne.

The order of the new aircraft shows how far the airline has come since its period of uncertainty in the second half of last year. Unfortunately, SkyWork Airlines had to cancel all operations between 29 octubre and 31 octubre last year due to the airline being unable to present essential financial documents when asked by authorities. However, the airline managed to provide the documents by the end of the month and resumed regular services in early November.