Please can we suggest looking at these alternative airlines that fly similar routes to Small Planet Airlines, by clicking on their logos:

In junio 2012, Small Planet Airlines finalised an agreement to acquire more planes to add to its existing and new international routes. It was also looking at various types of turboprop aircraft for new domestic routes but this plan was eventually dropped. The A340s joined the fleet in octubre 2012, enabling the airline to strengthen its Manchester route with nonstop flights as well as launch a second Lahore-UK destination, Birmingham, in septiembre 2013. UK operations also ended with Birmingham being dropped after just three months' service and Manchester ending in enero 2014.

The airline began to experience financial difficulties in octubre 2018, and finally ceased flying operations in noviembre 2018.

Passengers flying on Small Planet Airlines are allowed to bring one item of carry-on baggage. The baggage must weigh no heavier than 5kg and must not exceed the dimensions of 56 cm x 45 cm x 25 cm. Passengers are also allowed to bring additional items onto the flight separate from their carry-on bag, including purses, books and hand-held cameras.

Passengers flying on Small Planet Airlines are entitled to one item of checked baggage. Baggage can't exceed the total dimensions of 158 cm and one piece of baggage can't weigh more than 32kg.

Small Planet Airlines give passengers the option to buy additional baggage if required.

Small Planets Airlines open online check-in 72 hours before the flight departures and closes four hours before the flight departures. Please ensure your print your boarding pass after you have checked-in online. Online check-in is available for most flights from Vilnius on Small Planet Airlines, excluding flights S5-3506 from Bodrum, 253312 from Funchal, S5-3362 from Faro, S5-3392 from Almeria, S5-3378 from Zakynthos and flights S5-3317 and S5-3318 between Vilnius and Cape Verde.

Vilnius Airport is located south of the city Vilnius, the capital of Lithuania. It is one of the most rapidly growing airports in Europe, with only one runway and 2 terminals but nearly 4 million passengers each year. It commenced operations in 1932 is now the largest commercial airport in terms of passenger traffic. It used to be the hub for Air Lituanica, before it ceased operations in 2015. 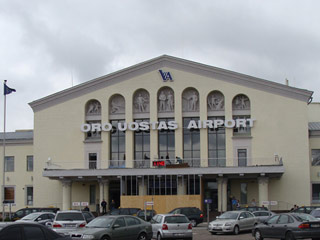 The Small Planet Airlines fleet consisted of the following aircraft:

Small Planet Airlines take in delivery of additional Airbus A320-200