Search and book flights with sudan-airways

Make a Sudan Airlines Booking and Find Some Amazing Deals

Sudan Airways is the national airline of Sudan. Headquartered in Khartoum, Sudan, the national carrier has been fully owned by the government since 2012 and stands as one of Africa's oldest airlines, having been formed in 1946.

The airline is a member of the International Air Transport Association, of the Arab Air Carriers Organization since 1965, and of the African Airlines Association since 1968, becoming a founding member along with another ten companies.

Unfortunately, since in 2010, Sudan Airways has been included on the list of airlines banned in the EU.

Alternative Airlines are unable to sell Sudan Airways ticket, however, we can suggest alternative airlines who fly similar routes to Sudan Airways; see our list below.

One carry-on bag per person that does not exceed 55 x 35 x 25cm dimensions.

The maximum weight for checked baggage is 20kg. One bag is permitted per person. Any excess baggage must be booked in advance. Children of two-ten years old have the same baggage allowance as an adult. Children under two are permitted one bag with a maximum weight of 10kg.

Online check-in is not available for Sudan-Airways flights.

Sudan Airways current fled consists of a mix of Fokker and Airbus aircraft. However, the airline has flown many different aircraft type in the past, including Boeing, Comet, de hHavilland, Douglas and McDonnell.

Khartoum International Airport is an airport in the capital of Sudan, Khartoum. The airport will soon be superseded by a new airport which will be located 40km to the south of the city. It is expected to have two 4000 metre runways and a passenger terminal of 86 000 metres squared. 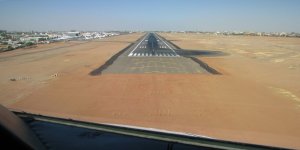