Make a Sylt Air Booking and Find Some Amazing Deals

Sylt Air is an airline based at Sylt-Ost, Germany, operating chartered and scheduled flights from Sylt Airport.

The Aeroline GmbH was originally founded in 1992 by Daniela Kohnen and Peter Siemiatkowski in Berlin. In agosto 1993, the flight school Sylt, which had existed since 1972, was taken over by the Aeroline-GmbH, thus opening up another field of activity. In 1994, the company moved to Sylt after the Ministry of Economy, Technology and Transport of the State of Schleswig-Holstein had granted the license for the commercial transport of passengers.

Initially, a single-engine Piper-Turbo-Arrow and a chartered 2-engine Cessna-337 were used. The offer of the Aeroline included tours over Sylt and charter flights. After the acquisition of the "Friesenflug" by Peter Siemiatkowski, there were now charter, line and round flights in one hand. To document this association to the outside, the new name SYLT-AIR was created in 2001. 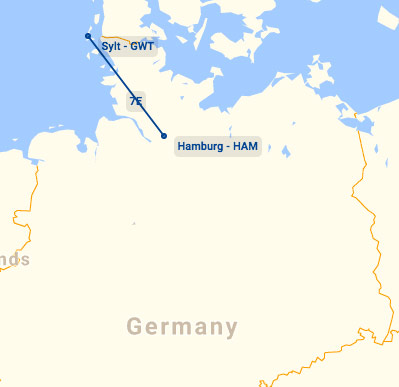 The airline's fleet consists of Cessna and Partenavia. The airline has over five aircraft within its fleet, which it uses for both its scheduled and charter services.

Baggage will depend on the fare chosen, however, the following is the general baggage allowance.

Carry-on baggage allowance is up to 8kg.

Checked baggage allowance is up to 15kg.

Airport check-in is available at the airport of departure. Passengers cannot any later than 30 minutes before scheduled flight departure time.

German carrier Rhein-Neckar Air in abril 2017 is adding service to Sylt, with flights offered from Mannheim and Nuremberg. First flight is scheduled on 05APR17, operating twice weekly each with Dornier 328 aircraft