Make a TransNusa Booking and Find Some Amazing Deals

TransNusa is a domestic Indonesian airline, serving the east of Indonesia.

TransNusa is based at El Tari Airport in Kupang, Indonesia and began operations in 2005 from Kupang. In 2011, TransNusa received its own air operator's certificate (AOC) and scheduled commercial airline permit.

Currently, TransNusa offers one class fare on its flights: the standard economy. You can enjoy some light refreshments and a cold drink. You can stay entertained onboard with TranNusa's in-flight magazine, the Pesona Nusantara.

Enjoy comfortable and spacious seating with a good amount of legroom. The team will be on-hand to help.

TransNusa has a fleet consisting of over five aircraft in total. Within its fleet, TransNusa operates a mix of Airbus and British Aerospace, including models such as the ATR42-500, ATR72-600 and BAE-146-100.

Passengers are given a hand baggage allowance of 5kg, free of charge, on all TransNusa flights.

Passengers are allowed to check a maximum of 20kg of checked baggage on their TransNusa flight. Anything over 20kg will be considered as excess baggage and will be charged at Rp15000 IDR per kg.

Airport check-in is available between 2 hours—45 minutes before flight departure on all TransNusa flights. Passengers can check any baggage they have to drop at the TransNusa check-in desks as well as print their boarding passes. Boarding closes 30 minutes before departure, so it's advised that passengers arrive well in advance to allow time for check-in, security and boarding. 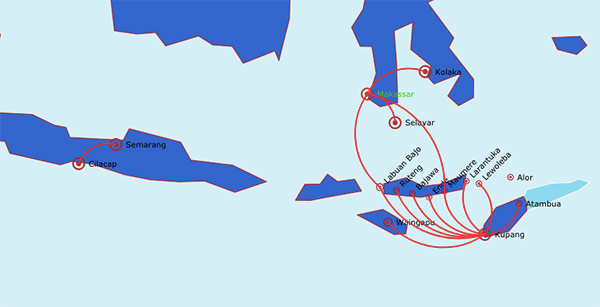