All you need to know about Uber Air, including updates on the cities where you can expect to be able to catch an air-Uber in the near future, aircraft information, and top FAQs! 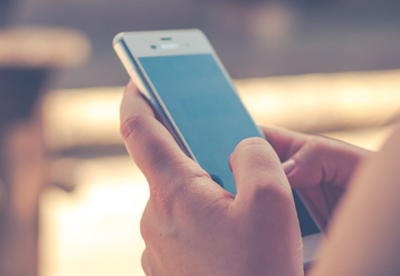 This new 'sky taxi' service will be known to riders as Uber Air.

The on-demand service will aim to reduce riders’ commute times, as well as relieve city congestion.

The company is working with vehicle and ecosystem partners, including NASA and the US Army Research Laboratory (ARL) to launch a fleet of e-VTOL (electronic vertical takeoff and landing) aircraft.

The flying taxi service is being developed in Dubai, Dallas, and Los Angeles. Los Angeles and Dallas will be the first American cities to demo the flying taxi system, planned for 2020, with commercial fliers expected to be available by 2023.

The e-VTOL aircraft will fly between conveniently located Skyports. Some of the top names in design, architecture and engineering are designing these Skyports, which will be capable of handling up to 1,000 landings per hour, despite having a footprint as dense as an acre or 2.

The company is working with US federal and local policymakers to ensure the new aerieal offering is safe and environmentally conscious. 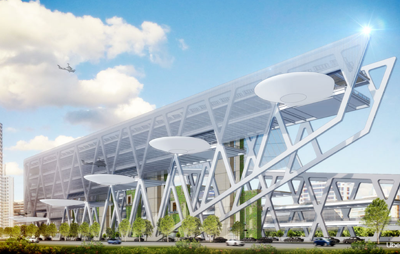 A number of international cities will also launch Uber Elevate in the near future. Uber has said that preference will be given to high density metro areas, with at least 2 million people, so that ‘pooling flights’ make sense. During the agosto 2018 Uber Elevate Asia Pacific Expo in Japan, Uber announced its shortlist for countries that it would work with to launch its aviation project. These cities include:

Melbourne, in Australia, has recently been announced the first international city to offer Uber flights. Further cities have yet to be announced.

During the agosto 2018 Uber Elevate Asia Pacific Expo in Japan, Uber presented potential city flight paths to demonstrate what it could look like when a customer orders an Uber Air flight via the app.

As an example, Uber proposed trip from San Francisco to San Jose. Uber says that the e-VTOLs would take 15 minutes to complete the journey that would take well over 2 hours by car. Here is the flight route that Uber proposed: 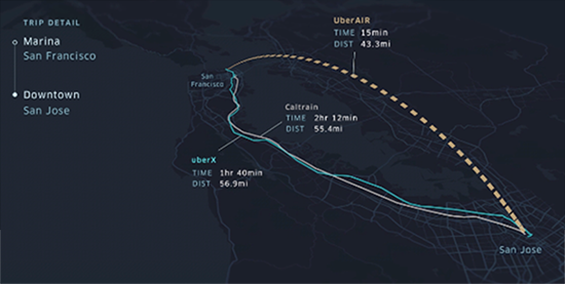 What airplanes will Uber use?

The flight-sharing network will be operated by a fleet of electric vertical take-off and landing aircraft (e-VTOLs). 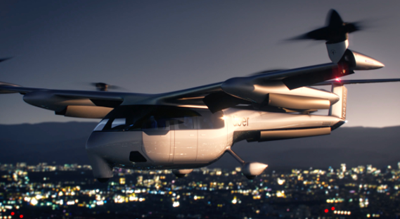 What are e-VTOL aircraft?

E-VTOL stands for 'electronic vertical takeoff and landing' and refers to a new series of lightweight aircraft. These newly designed planes will be electric and are expected to cruise at about 150 mph and reach 2,000 feet. The planes will fly at a speed of 60 miles and operate on a charge.

Requirements include: 150 mph cruise speed; 60-mile sizing range; a capacity for one pilot and 4 riders; and a 3-hour sprint of 25-mile trips.

How much will an Uber Air Taxi cost?

When can I fly on an Uber Air?