Make a Virgin Atlantic Booking and Find Some Amazing Deals

Virgin Atlantic is a British airline whose hub airport is located at London Gatwick Airport.

On all its Economy and Premium Economy fares, Virgin Atlantic allows one piece of carry-on luggage, measuring 23x36x56cm and 10kg or under. Additionally, passengers are allowed a small handbag or rucksack.

The Virgin Atlantic baggage allowance for ‘Upper Class’ passengers is two items of hand luggage with a combined weight of 16 kg/ 35 lbs, with no one item exceeding 12 kg/ 26 lbs. Each item must also not exceed the standard dimensions of 23 x 36 x 56 cm.

Virgin Atlantic allows one 23kg bag on most of its economy fares, free of charge. If you are going on a long trip, Atlantic offers a Ship Your Luggage service, where you can send your luggage pre-flight, and have having to lug around your bags on the day of travel.

All Economy seats come with onboard Wi-Fi, TV and films, complimentary drinks and snacks, in-seat power for your devices, and a choice of a 3-course meal. There are three levels of Economy: Economy Light, Classic, and Delight.

Economy Light means you still get everything you’d expect on a great flight - but at a price, you wouldn’t.

Economy Classic comes with advanced seat assignment included, so there are no worries about paying extra to get the seats you want, next to the people you want.

Economy Delight means you can speed through the airport by using Premium check-in desks, enjoy priority boarding, and get first dibs on overhead storage before settling into your extra legroom seat with 34" seat pitch.

Virgin's Business class, which it calls Premium, comes will numerous extra benefits to make your entire journey as comfortable and seamless as possible. Those extra few inches of space, a glass of bubbly as you board, and a tasty meal served on china crockery with proper cutlery.

Comfortable leather seats let you fly in luxury. A complimentary drink and newspaper will greet you, and, on night flights, you'll be given a Premium amenity kit.

Upper-Class passengers can take advantage of Virgin's complimentary chauffeur service, and have access to the Virgin Atlantic Upper Class wing at London Heathrow, complete with private access and Clubhouse. Onboard, seats recline fully and convert into beds. Virgin has also worked with innovative chefs to develop an incredible dining experience.

Online Check-in is the fastest, simplest way to do it. It's open from 24 hours before your flight until 70 minutes before departure.

Why not check in online via the Virgin Atlantic mobile app?

Airport check-in desks generally close 60 minutes before departure. This time can vary so we recommend you check the airport guide for your departure airport. 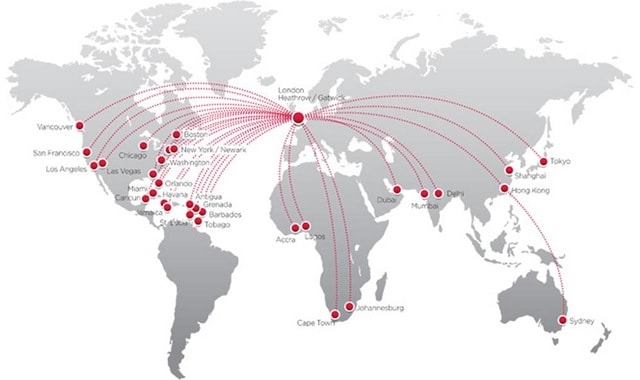 Get all Virgin flight deals today!