Make a Zanair Booking and Find Some Amazing Deals

ZanAir is a domestic airline based in Zanzibar, Tanzania. It was founded in Zanzibar in 1992 and is one of Tanzania’s most established airlines. The airline serves many destinations within Tanzania, as well as remote unpaved bush locations. These include Arusha, Dar es Salaam, Pemba Island, Saadani National Park, Selous Game Reserve and Zanzibar. Find other airlines that operate safari flights.

Its fleet consists of Cessna 207A, Cessna 208B Grand Caravan and Cessna 404 Titan.

Since beginning flying operations in 1992, ZanAir has continued to establish a quality reputation, serving esteemed clientele. For over 10 years ZanAir has offered quality air charter services for both the Corporate and Tourist market from Zanzibar.

Tarangire - The home of Elephants

The airline doesn't offer online check-in for its flights.

To check-in for their flight, passengers must check-in at the airport.

The airport check-in counter is open from 60–20 minutes before the scheduled flight departure time on flights leaving from Zanzibar, Dar Es Salaam and Pemba.

The airport check-in counter is open from 90–20 minutes before the scheduled flight departure time on flights leaving from Arusha. 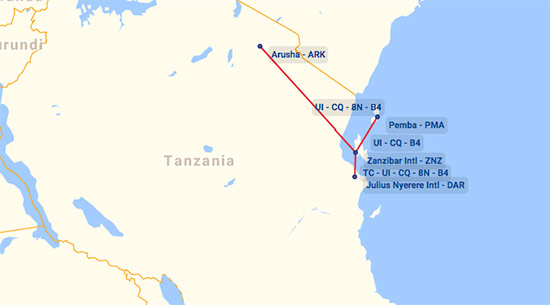 ZanAir is based at Abeid Amani Karume International Airport, which is the main airport in the Zanzibar Archipelago located on Unguja Island. It is located 5km (3.1 mi) south of Zanzibar City, the capital of Zanzibar, and has flights to East Africa, Europe, and the Middle East. Expanded in 2013, the airport now serves international flights from Africa and the Antarctic. Airlines which fly to and from this airport include Arkia Israel Airlines, Condor, Coastal Aviation, Ethiopian Airlines, Israir, flydubai, Regional Air Services, Precision Air, Oman Air, Meridiana, Malawian Airlines and many others.